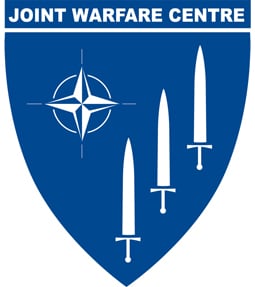 The Joint Warfare Cente crest consists of three swords distinctively lined up next to each other, together with the four-pointed NATO star on a blue background. The three swords symbolize the Centre's unique mission capabilities --- one for Training (exercises); one for Doctrine, Concept Development and Experimentation; and one for Lessons Identified/Learned (warfare).

Symbolically, the swords point upwards, which represents preparedness, or readiness, and courage in the face of any challenge. The swords also represent the seemingly paradoxical goal of achieving peace and freedom.

All in all, these are the qualities that befit a training centre focused on transforming NATO forces and boosting their capabilities so that they become more expeditionary, interoperable and effective.

Another symbolism for the three swords suggests NATO's joint forces of land, maritime and air.

The crest of the Joint Warfare Centre is also inextricably linked with the history of Norway. The "Swords in Rock" monument in Hafrsfjord is the most recognizable and iconic symbol of the city of Stavanger. It consists if three enormous bronze swords pointing downwards and standing for peace and unification. The monument was erected to commemorate the unification of Norway and was designed by a local artist named Fritz Roed.