A brief look into OPFOR, the JWC-led simulated enemy

STRIKFORNATO is NATO’s premier maritime battle-staff, and the Alliance’s primary link for integrating US maritime forces into NATO operations.

The visit programme started with an office call with US Air Force Brigadier General Roger H. Watkins, JWC’s Deputy Commander/Chief of Staff and the TRIDENT JUNCTURE 15 (TRJE15) Deputy Exercise Director, followed by a series of briefings and meetings about the ongoing Command Post Exercise (CPX).

The Rear Admiral’s visit to the JWC also included a stop at the Opposing Force (OPFOR) Response Cell within the exercise Situation Centre (SITCEN).

Under the leadership of JWC, the 48-strong team behind OPFOR is an eclectic mix of marines, sailors, soldiers and civilians coming from STRIKFORNATO, the Counter Improvised Explosive Devices Centre of Excellence (C-IED COE), Joint Air Power Competence Centre (JAPCC) and the NATO Strategic Communications Centre of Excellence (NATO StratCom COE).

The OPFOR Response Cell has been a focus of attention for some time and deservedly so… It represents a key function during the CPX.

It is the home to the simulated enemy. 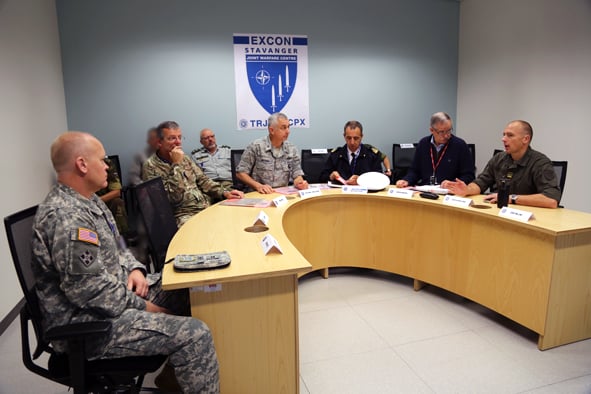 What does OPFOR deliver?

Simply put, the OPFOR acts as the key antagonist within the JWC-created SOROTAN training scenario.

It is the enemy which simulates all modern threats, including cyber, electronic warfare, proxies, conventional warfare as well as those in the information domain. It synthesizes political and military activity and operates from the strategic to the tactical levels.

First used in exercise TRJE15, SOROTAN enables an out-of-area, non-Article 5 Crisis Response Operation against a near peer opponent in the fictitious Cerasia region. The main aggressor here is the dictatorship “Kamon” who invades its weaker neighbor “Lakuta” before moving on to expand its military aggression to the entire region.

The use of an OPFOR is not new for JWC; however, for the first time during TRJE15, the JWC-led OPFOR will be augmented by designated NATO HQs and organizations who will together replicate “Kamon” as the state and aggressor.

For this purpose, the team developed --- based on JWC’s strategic guidance --- an OPFOR CONOPS in October 2014, which they are currently executing and thus shaping the exercise’s operational environment in line with Joint Force Command Brunssum’s Training Objectives. 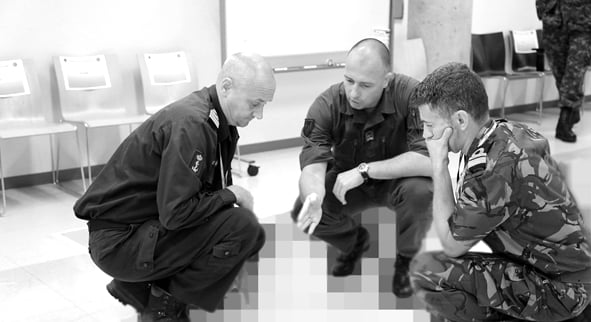 He added: “To develop an OPFOR plan from the strategic down to the tactical level with expert contributions from STRIKFORNATO, C-IED COE, JAPCC and NATO StratCom COE as well as Canada was quite challenging, but it was also a great experience and opportunity.”

During the execution of the United Nations (UN)-authorized mission within the scenario, NATO’s international assistance force will need to apply the Political, Military, Economic, Social, Infrastructure and Interoperability (PMESII) principles in order to help protect the threatened countries in Cerasia and simultaneously solve a series of complex problems, including many humanitarian emergencies as well as safeguarding the freedom of navigation at sea.

US Marine Corps Colonel Geoffrey Anthony, the head of the STRIKFORNATO team, said: “STRIKFORNATO is pleased to be a part of this exercise and able to contribute an OPFOR to inject realistic enemy actions providing the Training Audience the best experience possible during TRJE15. We receive an added benefit at being fully into the exercise, gaining valuable experience which will help us prepare for our role as the NATO Response Force (NRF) Maritime Component Command (MCC) for TRIDENT JUNCTURE 16.” 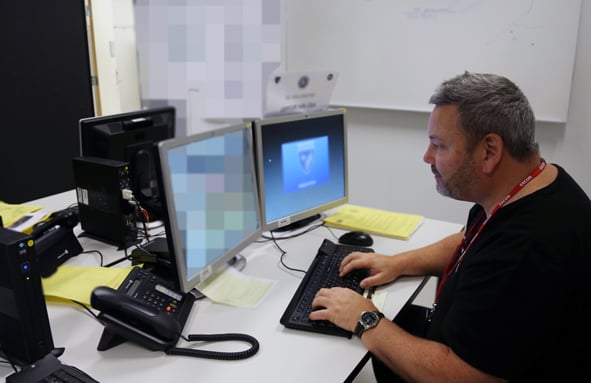 Exercises such as TRIDENT JUNCTURE 15 not only help to increase the readiness and preparedness of NATO’s forces but they operationalize the “Connected Forces” concept, which reinforces full-spectrum joint and combined training and promotes interoperability, including with Partners.1

Swedish Army Lieutenant Colonel Niklas Tornesjo from C-IED COE is participating in the exercise as a member of the OPFOR team. “The Swedish partnership with NATO emphasizes the importance of international relations. Sweden’s contribution to C-IED COE is a small piece in this endeavour,” he noted.

He then added: “Amongst other tasks, I am also responsible for developing the actions of the KGU --- this is a network of organized proxy forces within this hybrid scenario. The KGU was developed by the C-IED COE with support from US Army Europe (USAREUR) and US Defense Forensic Science Center. OPFOR is an important tool to support the Training Audiences in achieving their goals and also validating their capabilities. OPFOR has to be very realistic because hybrid threats and irregular actors, terror organizations and other crime networks who may also use IEDs as a weapon of choice is a global threat. By developing a realistic and complex proxy force within the OPFOR, we aim to challenge the Training Audience as much as possible.”

Lieutenant Colonel Tornesjo continued: “The vision of C-IED COE is to highlight the importance of a comprehensive and interagency approach in solving crises, including the counter-IED efforts. When it comes to OPFOR, we want the Training Audiences to understand that they will have to coordinate all military skills and processes with all the stakeholders. They need to cooperate with the intelligence services and the law enforcement units so that they can effectively gather all the information they need to identify and engage the critical elements of a threat network. Forensic science is an important tool in this process.” 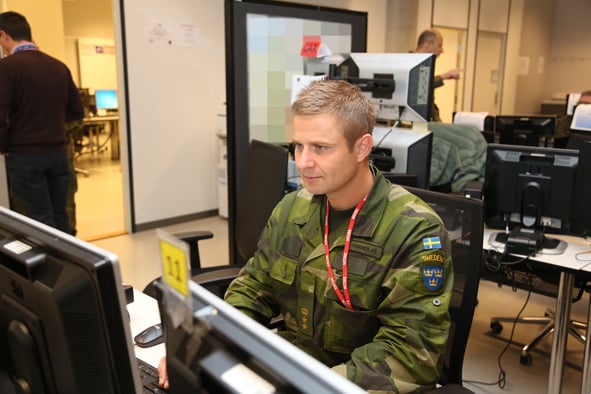 Is the Training Audience ready for OPFOR?

Reflecting on JWC’s role in the development of OPFOR since exercise TRIDENT JUNCTURE 14, Lieutenant Colonel Schilcher said: “I believe that the cooperation with external HQs and organizations proved that it is possible to develop a realistic, dynamic and challenging Opposing Force. But, the question remains: Is the Training Audience able to cope with the challenge?”

TRJE15 is the culmination of the NRF training cycle in 2015. It is also a test-bed exercise for the new Very High Readiness Joint Task Force (VJTF) within the NRF --- a key part of NATO’s strategic and operational adaptation.

“At the core of NATO’s defence strategy lies the NATO Response Force (NRF) 2,” wrote Royal Air Force Squadron Leader Colin Macpherson, a former JWC Training Team staff officer, in a cover story for JWC’s The Three Swords magazine in November 2014, adding: “To shape the components of NRF into one cohesive force requires a collective and structured training framework on which to build a comprehensive understanding of the emerging operational environment.”

And altogether this is JWC’s role.

TRJE15 is taking place throughout Italy, Portugal, Spain, the Atlantic Ocean, the Mediterranean Sea and also Canada, Norway, Germany, Belgium and the Netherlands, involving 36,000 personnel from more than 30 Allied and Partner Nations.

The exercise, which will be conducted in two phases (CPX and LIVEX) aims to train NATO’s joint forces on Command and Control (C2) and joint interoperability, allowing them to deploy and train together in a very demanding environment while demonstrating NATO’s capabilities and readiness to face a high-intensity crisis.

What is best for NATO is unlikely to be at the top of OPFOR’s priority list --- before returning back to his sinister cell; Lieutenant Colonel Schilcher gives a small but very promising hint: the OPFOR will be featured extensively in the upcoming issue of JWC’s November issue of “The Three Swords” magazine! 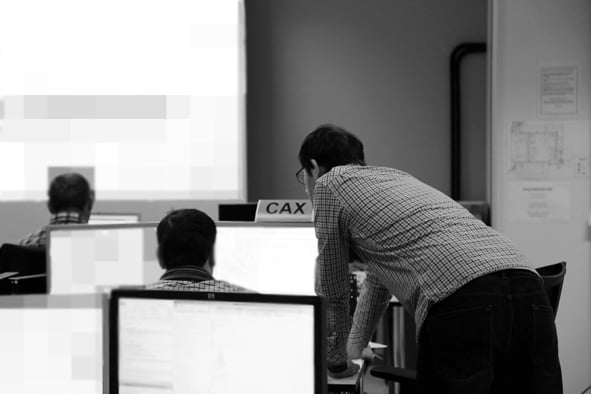