The National Societal Safety Conference 2014 (Samfunnssikkerhetskonferansen 2014) brought 309 participants to the University of Stavanger on Thursday 9 January to discuss the extraordinary events and stresses society is exposed to, with theories related to understanding risk, security and crisis management, combined with preparedness and prevention.

Jointly organized by County Governor of Rogaland, Rogaland Police District, University of Stavanger and NATO’s Joint Warfare Centre (JWC), the conference was based on themes related to common societal safety issues in an international perspective and the challenges emerging from centralization.

Special attention was given to the topic of crisis management and its capabilities such as prevention, preparedness, response and recovery. Also comparative perspectives were shared on quality of health-care services, police in modern society, vulnerability assessments and risk analysis.

Marit Boyesen, Rector of the University of Stavanger delivered the opening speech at the conference. She highlighted that the conference was a great window of opportunity to network and collaborate. She said it allowed for the bonds to grow between different delegates from academia, government agencies, politicians and the civil society.

“This is an excellent opportunity for all those gathered to explore and take part in hearty discussions about important issues facing societal safety. Your cooperation has a very positive impact on our university,” she said. The Rector then talked about the Centre for Risk Management and Societal Safety (SEROS), which was established in 2009, and the Centre’s research activities around the conference themes.

Rector Marit Boyesen, who visited the JWC last year in June, gave special importance to JWC’s role and participation in the conference.

One of the keynote speakers of the conference was U.S. Air Force Brigadier General John W. Doucette, JWC’s Deputy Commander and Chief of Staff, who gave a briefing on the mission, structure and activities of the Centre. He underlined JWC’s defining position within NATO as the premier educational and training institution since 2003.

“It is an honour to be with you here today,” the Brigadier General said. Referring specifically to military safety and security regards, he underlined that the conference brought together different communities who were all seeking to better understand numerous multi-faceted global security challenges and how to defend against them.

He then referred to JWC and its defining mission within NATO. “JWC is certainly unique,” the Brigadier General said, adding: “It is NATO's only organization that can simultaneously deliver robust training for on-going military operations, prepare forces for conceivable and unconceivable contingencies in a multitude of scenarios developed also in-house, while supporting lessons learned, concept and doctrine development for the Alliance. JWC also hosts NATO’s most sophisticated computer-simulated electronic environment and its own TV studio for a simulated media capability. By building our new training centre in Jatta for an estimated cost of 100 Million Euros, Norway clearly has invested in the future of NATO training.” 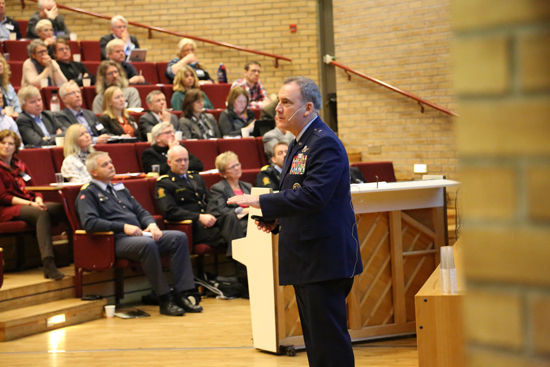 Brigadier General Doucette then invited the participants to visit JWC for a special tour of the facilities. He underlined stronger collaboration between the University of Stavanger as well as prominent local organizations, the aim being further development of relevant and credible capabilities for everybody. Brigadier General Doucette said: “We have been proud of each and every visit to JWC over the years. We would be very glad to see you at JWC and I hope this conference will stimulate further engagement and collaboration between us.”

The afternoon session of the conference included a panel discussion and the closing speech was delivered by Tora Aasland, the Rogaland County Governor.

More information, including a complete conference schedule as well as the presentations can be found at www.uis.no