The largest and most ambitious NATO exercise in over a decade, TRIDENT JUNCTURE 15, kicked off at Joint Warfare Centre (JWC) on Saturday, 3 October.

“We have had a very good Day One of the exercise and I am certain that the Training Audiences will meet all of the exercise training and evaluation objectives in an excellent manner. This ensures NRF is more than ready to meet its mission requirements,” said US Air Force Brigadier General Roger H. Watkins, JWC’s Deputy Commander/Chief of Staff as well as TRJE 15 Deputy Exercise Director.

TRIDENT JUNCTURE 15 is divided into two parts: In addition to the operational level CAX/CPX directed by German Army Major General Reinhard Wolski, Commander Joint Warfare Centre, there will be a live exercise (LIVEX) in early November, which will focus on the tactical training of NRF 16.

The purpose of the exercise is to train NATO’s joint forces on Command and Control (C2) and interoperability, allowing them to deploy and train together in a very demanding environment while demonstrating NATO’s capabilities and readiness to face a high-intensity crisis. 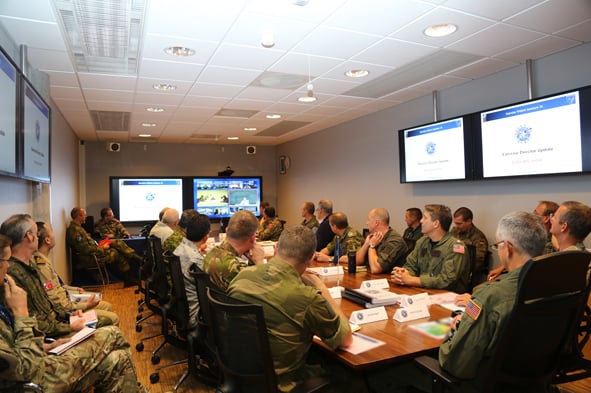 “We want to challenge the traditional military way of thinking and ensure that the Training Audiences are well positioned to respond to any emerging crisis, be it a crisis response operation or highly complex humanitarian emergencies,” said US Navy CDR Mike Angelopoulos, JWC’s Chief Main Events List/Main Incidents List (MEL/MIL) for the exercise.

TRIDENT JUNCTURE 15 will take place in multiple locations across the Alliance, including Italy, Portugal, Spain, the Atlantic Ocean, the Mediterranean Sea, Canada, Norway, Germany, Belgium and the Netherlands, involving 36,000 personnel from more than 30 Allied and Partner Nations.

More than twelve major international organizations, aid agencies and non-governmental organizations, such as the European Union and African Union, are participating in the exercise, promoting and advancing NATO’s Comprehensive Approach and Connected Forces Initiative (CFI) concepts.

It is in this framework that the computer-driven CPX construct led by the JWC will operationalize the CFI by facilitating strong cooperation and interaction with the Canadian Joint Operations Command (CJOC) Exercise Control (EXCON) based in Ottowa, Canada as well as with the Multinational Joint Headquarters in Ulm, Germany (MNJHQ Ulm).

“Canada is very pleased to be participating in exercise TRIDENT JUNCTURE 15 under the CFI. This exercise provides Canada with an amazing opportunity to train with our NATO partners and to participate in the largest and most important NATO training exercise in decades. The teamwork and cooperation of our NATO Allies are deeply appreciated by all Canadians involved,” said Canadian Army Lieutenant Colonel David McKeeves, Senior Canadian Representative to the exercise. 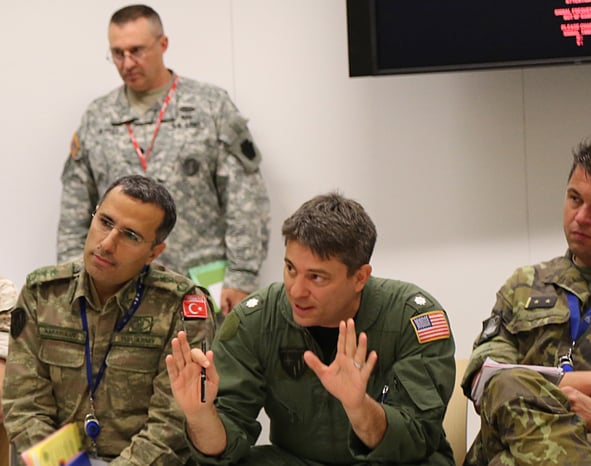 During the CPX, the Stavanger-based Exercise Control (EXCON) organization will test the ability of NATO forces to respond to a wide range of security threats, from hybrid warfare, to terrorism and maritime and air combat.

For JWC, planning for TRIDENT JUNCTURE 15 began in July 2013. The exercise is built on SOROTAN, the fictional scenario set in the non-existent continent of Cerasia. Created by the JWC, SOROTAN provides a complex and multi-faceted setting and scenario that enables an out-of-area, non-Article 5 Crisis Response Operation against a near peer opponent. It will challenge NATO’s joint forces with a wide range of conventional threats across the land, sea and air domains as well as unconventional threats, including hybrid warfare.

During the CPX the Training Audiences will be exposed to more than 2,000 injects as part of the scripted material known as the MEL/MIL.

CDR Mike Angelopoulos said: “The CPX will test them on capabilities such as strategic communications, Joint Intelligence, Surveillance and Reconnaissance (JISR), Ballistic Missile Defence (BMD) and cyber defence. We created a multi-layer exercise media environment, reporting on the overall situation in Cerasia, covering all perspectives, from local to international, as well as the adversary point of view. We will utilize a very strong White Cell to replicate the civilian organizations and agencies that the Training Audience could expect to encounter during a Crisis Response Operation. Additionally, Naval Striking and Support Forces NATO (STRIKFORNATO) will be acting as the Opposing Force during the exercise.”

He then added: “The whole NRF concept demonstrates that NATO is evolving. JWC is a great contributor to the readiness of NRF, and within it, the future success of a Very High Readiness Joint Task Force (VJTF).” 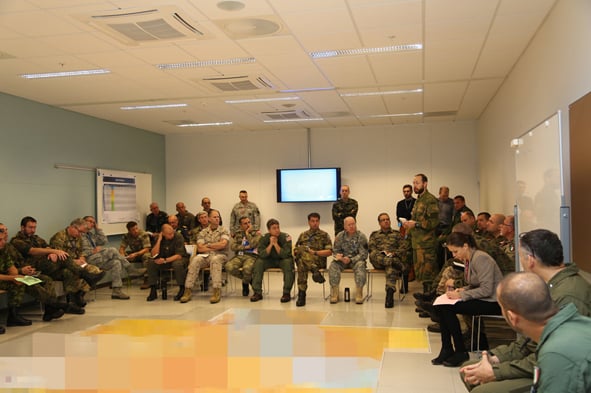 Although by sight TRIDENT JUNCTURE 15 looks like a standard CPX run by the JWC, it is anything but similar. One of the many partner units participating in the exercise is the Pennsylvania Army National Guard.

US Army Lieutenant Colonel Sean Malone, 28th Infantry Division Chief of Staff, said: “Soldiers of the 28th Infantry Division, Pennsylvania Army National Guard, have a great opportunity to be able to work within this multinational exercise. Working and living on a daily basis with our fellow NATO partners enables us to develop and improve our skill-sets as we build relationships with our Allies.”

Underlining the importance of sharing training opportunities, Lieutenant Colonel Malone added: “The facilities here at JWC are some of the best we have seen. The staff at JWC has been nothing but supportive, professional and friendly. Working with our NATO partners in a learning and cooperative environment has been an outstanding experience. These lessons and experiences we will take back to the US and share with our fellow Pennsylvania Guard members.” 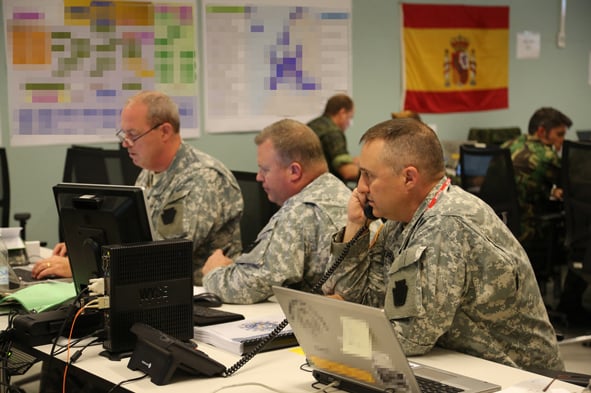 Simply put, a CPX is a computer assisted simulation with no live fire or manoeuvre exercises associated. “From a CAX perspective, TRIDENT JUNCTURE 15 is one of the most challenging and complex exercises that have been planned and played in the last eight years,” said Ivan Vianello, JWC’s CAX Specialist, adding: “This is based on the size of the forces represented in the simulation data base and also due to the fact that the number of actions planned to be simulated are six times more than a usual NRF exercise. Additionally, from a setup perspective, CAX is currently deployed oversees, with linkages to exercise sites in Europe as well as Canada. The key for JWC is to have a realistic but not over-sophisticated toolset. Such architecture will allow the CAX team to have the necessary flexibility to support any Training requirements.”

It simultaneously places the JWC in a unique position, at the heart of NATO’s Connected Forces Initiative, with the aim of demonstrating capabilities and endlessly improving readiness.

The JWC-led CPX will run until 16 October. 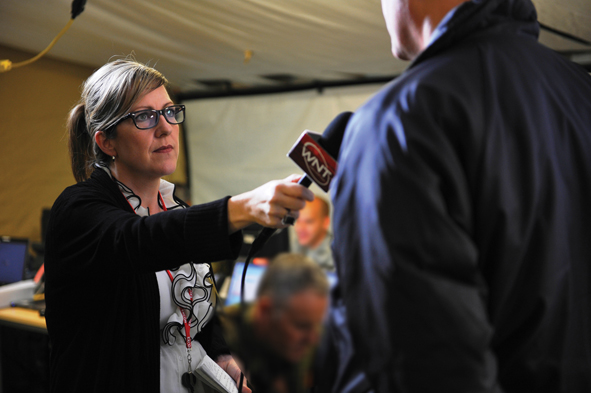 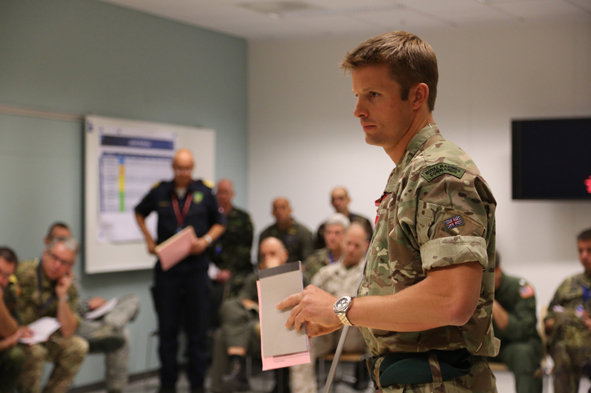 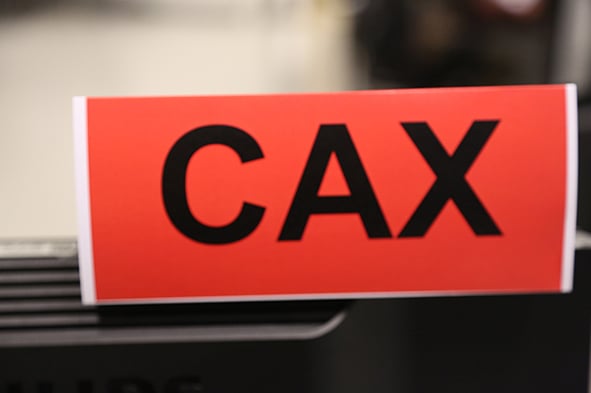 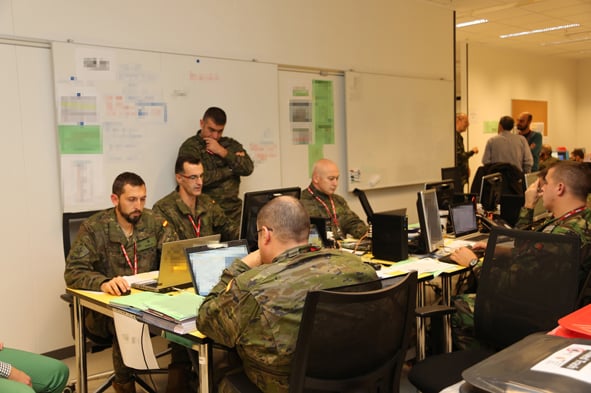 NRF 16 National Components under the lead of JFC Brunssum, are: