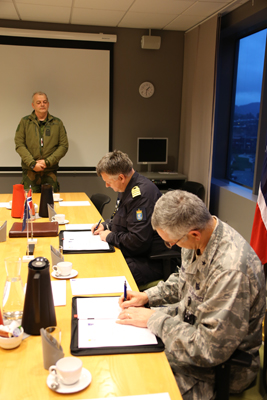 The new Local Arrangement, which will come into effect on 1 January 2016, is a non-legal document that highlights the continued close cooperation between the Ministry of Defence of the Kingdom of Norway and Headquarters Supreme Allied Commander Transformation (HQ SACT), represented by the JWC.

The arrangement reinforces the level of cooperation between Norway and the JWC as NATO’s footprint in the North. It aims to implement the provision of support outlined in the Memorandum of Agreement that relates to Host Nation Support working arrangements and agreements in areas such as Real Estate Management and Transportation Services.

The Local Arrangement is reviewed annually.