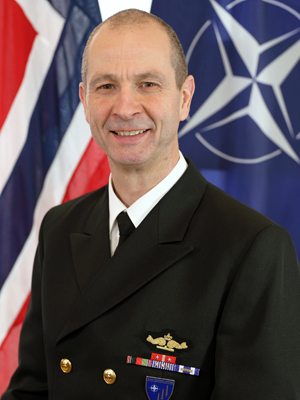 Commodore Knut Rief Armo was born on January 25, 1963. He graduated from the Norwegian Naval Academy in 1986. Upon his graduation, he served on several submarines, including HNoMS Kobben (as navigation officer), HNoMS Svenner (as executive officer) and HNoMS Kinn, HNoMS Stord, HNoMS Utsira, and HNoMS Uredd (as commanding officer) until 1994.

Between 1986 and 1997, Commodore Armo attended various training courses in Norway and the United Kingdom. In 1994, he was assigned as instructor with branch specialization on submarine tactics at the Norwegian Navy Submarine School, until his next assignment as tutor at the Norwegian Command and Staff College, where he served until 1998.

He then attended the Naval Postgraduate School in Monterey, California, the United States, graduating with a Master of Science Degree in Operations Research in 2000.

Commodore Armo was then posted to the Norwegian Defence Research Establishment in Kjeller (2000-2001) and afterwards served as Chief, Logistics and Infrastructure Branch at Headquarters Defence Norway in Oslo (2002-2003).

In 2003, he was assigned as staff officer to NATO Allied Command Transformation (ACT) where he served until 2006. Commodore Armo’s next assignments included Chief Naval Operations Branch (2006-2011), and the Acting Chief Joint Operations Department (2009-2010) at the Norwegian Command and Staff College in Oslo.

Commodore Armo is married and has one daughter. He enjoys cross-country skiing, hiking and vacationing at the family’s summerhouse.