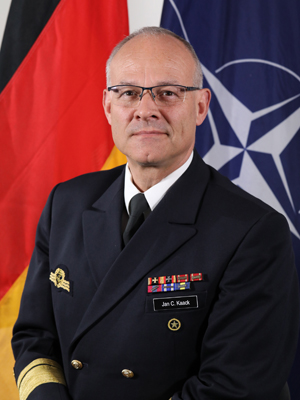 Rear Admiral Jan C. Kaack was born on 24 December 1962 in Eutin, Germany. He is an Above Water Warfare Officer by trade. He served on fast patrol boats with guided missiles (FPB) as Operations Officer until 1991; then aboard a helicopter carrier as Navigation Officer (FS JEANNE D’ARC, 1991–1992), and aboard destroyers as Above Water Warfare Officer (FGS ROMMEL, 1995–1997) and as Executive Officer (FGS MOELDERS, 1999–2001). He commanded FGS WOLF and FGS PANTHER of the 3rd FPB Squadron from 1992 to 1994, and frigate FGS BAYERN from 2003 to 2004, including a six months’ deployment as Flag Captain and Deputy Commander to Commander Standing Naval Forces Mediterranean during OPERATION ACTIVE ENDEAVOUR.

In the capacity of staff officer, Rear Admiral Kaack served as NATO J5 Staff Officer at Allied Forces Northern Europe (former AFNORTH) in Brunssum, the Netherlands (2001–2002), and Deputy Branch Head within the Military Policy Division of the Ministry of Defence in Berlin (2004–2006). He was promoted to Captain while serving as Director for the International Admiral Staff Officer Course (2007–2008) and subsequently took over as Deputy Commander and Chief of Staff of German Naval Flotilla 1 at Kiel, where he served until 2012. After completing this assignment, he assumed the position of Branch Head within the Strategy and Operations Directorate, being regionally responsible for Sub-Saharan Africa, the Americas, and the Arctic. In 2014, he was posted to the German Navy Headquarters at Rostock, where he spent six months as Branch Head of the Concepts and International Cooperation Branch before returning back to Kiel in April 2015 to assume the post of Commander German Naval Flotilla 1 and Director NATO Center of Excellence for Operations in Confined and Shallow Waters (2015–2018).

Rear Admiral Kaack was promoted to Rear Admiral (Lower Half/OF-6) in February 2016, and served as the Commander Task Force 465 (CTF 465) for the European Union Naval Force (EU NAVFOR) OPERATION ATALANTA from March to August 2016. Between April 2018 and June 2019, he was assigned as the Deputy Chief of Staff Operations of the German Joint Support Services Command in Bonn, in the rank of Rear Admiral (Upper Half/OF-7).

Rear Admiral Kaack is a graduate of the German Armed Forces University (MBA), the German Armed Forces Command and Staff College (both in Hamburg) and the U.S. Naval War College in Newport, Rhode Island (Class of 2007). He was awarded the German Cross of Honour in gold and silver, the French “Medaille de la Défense National” in bronze as well as two Certificates of Commendation by Commander in Chief AFNORTH (2003), and the Chairman of the European Union Military Committee (2016).

Rear Admiral Jan C. Kaack is married to Dr. Gesche Kaack and father to three children. In his spare time, he enjoys family life and all sorts of sporting activities, such as sailing in the Baltic Sea, mountain climbing and running. He is a keen reader of books on history and related literature.